Wunderlich stand in the spotlight

A neat solution to what can be a very costly problem, Wunderlich's new BMW Sidestand Light makes finding a solid and stable spot for the stand in the dark much easier.

Static falls can cause costly damage to body parts and engine components or, worse still, can end in injury to the rider, so finding a suitable spot to put down the sidestand is crucial. Difficult enough in the dark, sometimes in well-lit areas, the stand and underside of the bike is shadowed, making things difficult.

Operated with a handy and discrete handlebar-mounted switch, the Sidestand Light's LEDs illuminate the area around the bike's stand, so the rider can see clearly if the surface is suitable, before letting the stand take the weight.

It's quick and easy to mount, and connects to the bike's wiring loom via a simple plug – no cutting or soldering of wires needed.

The switch is programmed to work in conjunction with CAN bus, so turns off automatically once the ignition is switched off – preventing the rider leaving the light on and flattening the bike's battery.

The Sidestand Light is currently available for all liquid-cooled Boxer models, as well as the current six-cylinder models. Made in Germany, it comes with a five-year warranty for complete peace of mind. 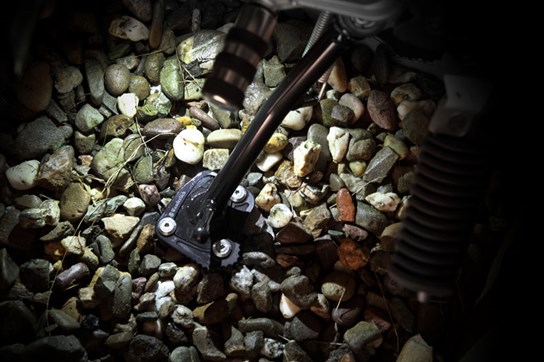