Put a lid on it with Wunderlich

New from BMW accessory specialist Wunderlich, the Helmet Anti-Theft System offers a safe, secure and simple way to store one or two helmets on the current BMW R1200GS, freeing up space in panniers/side cases.

The System consists of a strong 5mm thick steel rope – silicon-coated so it won't damage helmet or bike – and a spring loaded release, which bolts to the bike's frame, beneath the seat.

To secure a helmet: unlock and remove the seat as normal, unhook one end of the steel rope using the spring-loaded release, thread through the helmet's chin bar or metal D-ring, then re-attach the free end of the rope to the bracket and refit and lock the seat.

Unlike most on-bike helmet lock systems, both the spring release and bracket are locked under the machine's seat and out of sight, so it's impossible for any would-be-thief to tamper with the mechanism or lever the lock.

Since access to the release is protected by the seat lock, there are no additional padlocks or keys to carry around, either.

The steel rope is long enough to secure two helmets at the same time and, when not in use, can be conveniently stowed under the seat. 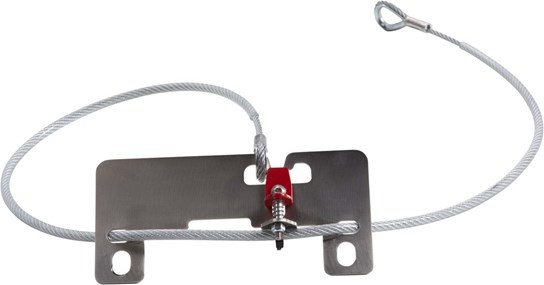