The genuine plant-tanned European cowhide Pouch is precision cut to fit like a second skin - and has a rubber bungee inside to ensure it stays firmly attached.

It helps protect the fob against damage caused by accidental drops on garage forecourts or from contact with other items in pockets, reducing the risk of being unable to start the bike and avoiding the significant cost of a replacement fob.

All functions of the KRS fob can be operated with the Pouch in place; a popper section can be opened to allow the key blade to swing out as normal, and there are cut-outs around the alarm ‘arm’ and ‘disarm’ buttons.

The button cut-outs are recessed to help prevent accidental operation when in pockets or luggage, reducing the risk of unintentionally leaving the bike unprotected. A punch-out for the attachment of a keyring also features.

The Wunderlich KRS Leather Key Pouch is available in either Black or Brown - with matching stitching and a subtle, embossed Wunderlich Logo on the side. It will fit the KRS Key Fobs of the following BMW models: 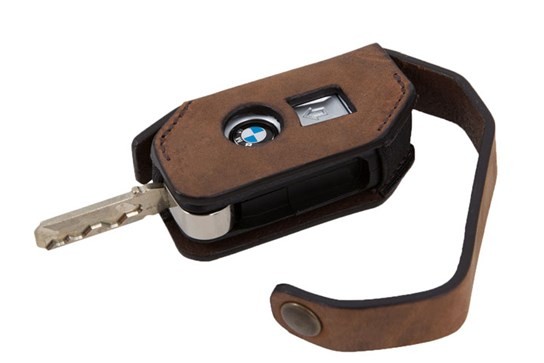