BMW riders can now power multiple devices on the move, without having to resort to fiddly and unreliable adapters, thanks to our new ‘Plug and Play’ Dual USB Socket.

All modern BMW bikes come equipped with a DIN socket to power accessories, however most devices require USB to charge, so adapters are often necessary, which can make the set-up more complex and less reliable.

Based on years of experience and feedback from Nippy Norman's customers, we developed the Dual USB socket specifically to solve the problem.

Designed for Plug-and-Play, the unit completely replaces the bike’s original DIN socket: simply unplug and remove the DIN from bike’s cable harness and install the USB dual charger in the same place and using same connector - no cutting of wires, soldering or expensive labour charges!

Both ports are weatherproof when in use - specially designed rubber membranes seal around the USB plug when it is inserted, protecting it against dust, dirt and moisture.

When not in use, separate rubber caps, which may be easily opened whilst wearing gloves, pop over the top of each port.

The Socket has an output voltage of 5V (+/- 5%) so is compatible with the most smartphones, sat-navs and tablets, and features Intelligent device recognition to detect Apple and Android devices.

Output over-voltage, overheating and short-circuit protection is also built in for complete peace of mind and each port has a current limiter.

The Plug-and-Play Dual USB Socket is fully Can Bus compatible and retails at just £35.00 including VAT. Supplied with full installation instructions, it can be fitted to the following BMW models:

The R 1200 RS LC in unsuitable due to frame rails 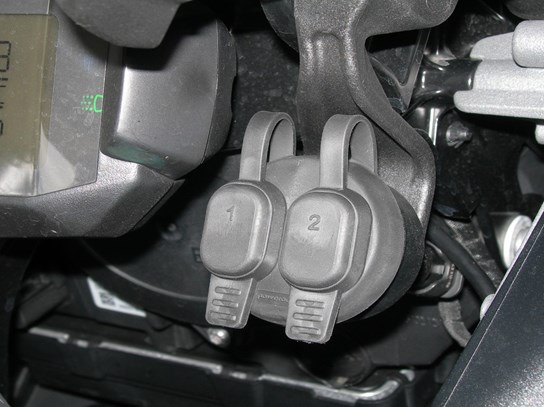