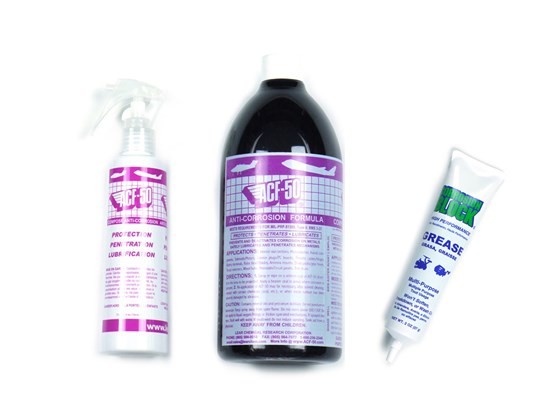 Contains 1 x ACF50 bottle and 1 tube of Corrosion Block grease - save and keep your bike in top condition!

Its uses on motorcycles are very similar to those on aircraft. Sprayed into the structure, joints and welds i.e. under the tank and seat, frame and steering head area (where the corrosion works away unnoticed), under panels and on hidden parts of the engine, radiators, engine cases, forks, calipers, wheels, anywhere on the bike really because it will work hard to prevent corrosion and structural degeneration. Where corrosion is already evident it will help inhibit further progress by insulating and electrically 'switching off' the corrosion cell. It will also penetrate around bolts, screws and hardware protecting them and preventing seizure.
Exposed engine and gearbox cases, swinging arms, forks and other exposed parts will benefit from ACF-50's thin film technology by not corroding, will stay looking good and will clean up easily after a salt laden ride. I also find it excellent on black plastic trim without the residue of silicon.
It will protect electrical joints, plugs and components and prevent corrosion causing high resistance joints. This goes for PCB's and electronics as well, such as computerized ignition and fuel control units and their multi pin plugs, while switches, controls and levers will all be lubricated as well as protected from corrosion. Multi pin plugs and connectors benefit from having ACF-50 applied directly to the contacts. It's uses are unending, you will love it!
Remember, ACF-50 protects jets on US aircraft carriers! If it works for these jets in these conditions, think how well it's going to work for your bike!
MOST IMPORTANTLY THE CHEMISTRY IN ACF-50 HAS THE ABILITY TO NEUTRALISE ROAD SALT
EXTRACT FROM MOTORCYCLE MECHANICS TEST
This was on three products designed to prevent corrosion: ACF50, Scottoiler FS365 and WD40.
Corrosion is caused by moisture in the atmosphere, which sparks off little corrosion cells almost like tiny batteries producing electrical current for as long as the oxygen and moisture are present. If you simply spray a lubricant over this area then it can seal in the corrosion, along with any moisture and oxygen, which does not help. Before any of the oil-based spray lubricants can be totally effective, the area must be completely dry and free of the corrosion and once applied, the layer must not be wiped off or broken in any way as this will allow the problem to start again.
A spray that doesn't rely on the slippery stuff to do its work is ACF50 - and I must admit to having been completely won over by it since first using it a few months ago, I t isn't cheap, but with so little required to be effective, a can should last a VERY LONG TIME. The sticky substance prevents the build-up of electricity between metals and stops corrosion by destroying the corrosion cells. It is also a good lubricant and can be used safely on most surfaces and applications.
The test the anti-corrosion properties of a variety of aerosol products, I lined up six old alloy pistons, doused them from a water spray loaded with salt water to simulate road salt, and left them outside throughout the harsh days of January and February. One piston received a liberal coating of ACF50, one was left untreated, the others were sprayed with Silkolene All-in-One, a cheap car accessory shop spray, Wurth Lube 2000, and the old favorite WD40.
After a week there were signs of a difference across the samples, with three of the five starting to gather that white furry corrosion where the spray had started to dissipate and allow the ingress of moisture and oxygen. The WD40 did a pretty good job, but after a two week period and a few squirts with the salt water, it was beginning to break down. The ACF 50 was emerging as the CLEAR LEADER WITH NO VISIBLE CORROSION. A single application is claimed by the manufacturers to last for UP TO TWO YEARS.
I have used ACF50 on my ACF50 on my VTR1000, constantly used over the winter months, and it has kept the big Honda clean and sparkling. I've even used it for cleaning the plastics - I'm impressed.

Daniel Thornton from Motor Cycle News reports on ACF50:
A great product which answers motorcycling's biggest problem - corrosion. Unless you're dedicated enough to wash your bike thoroughly after every ride, you're going to end up with furry nuts and bolts, and in winter even that might not be enough.
ACF-50 disperses moisture, lubricates and protects from further corrosions and stops any rust already forming from getting worse. I sprayed a test bike at the start of two weeks Peterborough to London commute in February, and didn't wash the bike once. After two weeks the only rust had been there already, and there wasn't a trace of new corrosion. And the same is true of my latest test bike, which had a thin coating before it turned a wheel. Even better, it works on electrics and even exhausts without buggering them up. You can't tell the bike has been sprayed until it rains, and there's no oily or greasy coating.
At £12 for an aerosol it's pretty good value, as it only needs a thin coating, and it should last a couple of washes. In hidden areas such as under the tank etc it can last up to a year, and you can tell if it's still working because any water will 'bead' on contact. And one regular user told me he adds it to his Scottoiler to stop the chain rusting.
It's easy to use, does what it claims, and solves an expensive problem. It should probably come supplied with every new bike!
BONUS FEATURE
ACF50 will also clean up black plastic on any motorcycle like new - simply apply, rub-in and the plastic looks like new AND will repell dirt more than before!
INCLUDES 1 x ACF-50 ANTI-CORROSION BOTTLE
AND
1 x ACF-50 CORROSION BLOCK GREASE 57g tube

Suitable for:
All bikes 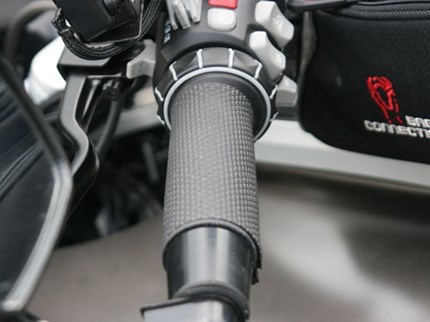 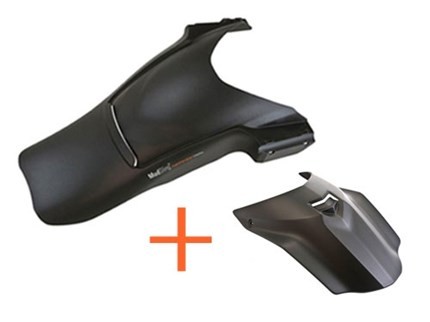